For Board of Directors elections, the most common option is to choose multiple candidates, followed by ranking candidates and assigning votes to candidates. Learn more about board of director election best practices.

For Board of Directors elections, it is very common to choose multiple candidates with the candidates receiving the most votes being declared the winner. This is also known as Plurality Voting or First Past the Post. 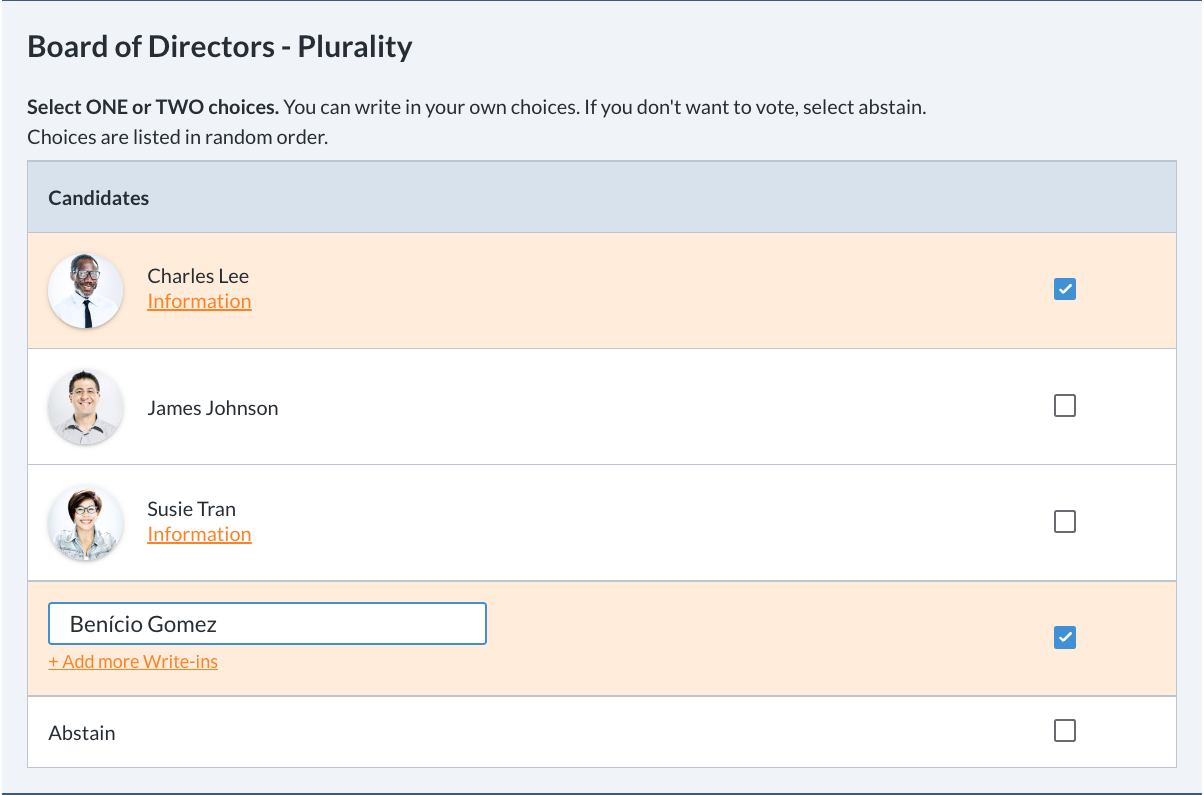 In the above example, ElectionBuddy announces candidates with the most votes as winners. Write-ins can be included, and voters can choose to abstain. ElectionBuddy results can be tallied allowing a majority result to be announced. The number of people elected will depend on the size of the board and the number of seats that are up for election. Other voting methods are available to select multiple board members, including Ranked-Choice ballots in a preferential election or Split Voting.

Ranked choice ballots where multiple positions are selected ensure that every vote counts as voters indicate all their preferences for candidates appearing on the ballot. This is also known as Preferential Voting. 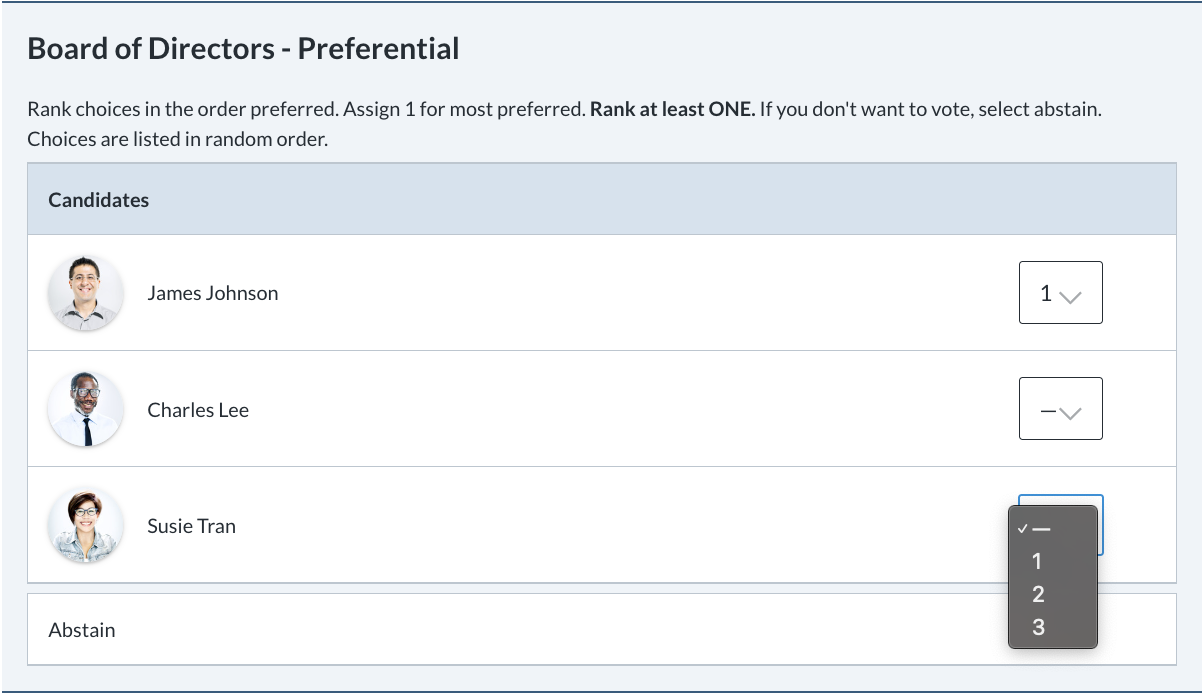 Preferential Voting is the perfect option when looking to have voters indicate their preference for a specific candidate relative to the other board members. In contrast, with plurality, voters are only stating their board member preferences relative to other candidates they didn't vote for; there is no way to gauge preference among the candidates they chose. When candidates are tied in Plurality Voting, a new vote needs to be held to break the tie, known as a run-off election. We use STV to calculate the results for a multiple-vacancy preferential election.

Cumulative voting ballots are where votes can be split amongst candidates to allow voters to delegate their votes to multiple candidates. This is required in certain states including California. 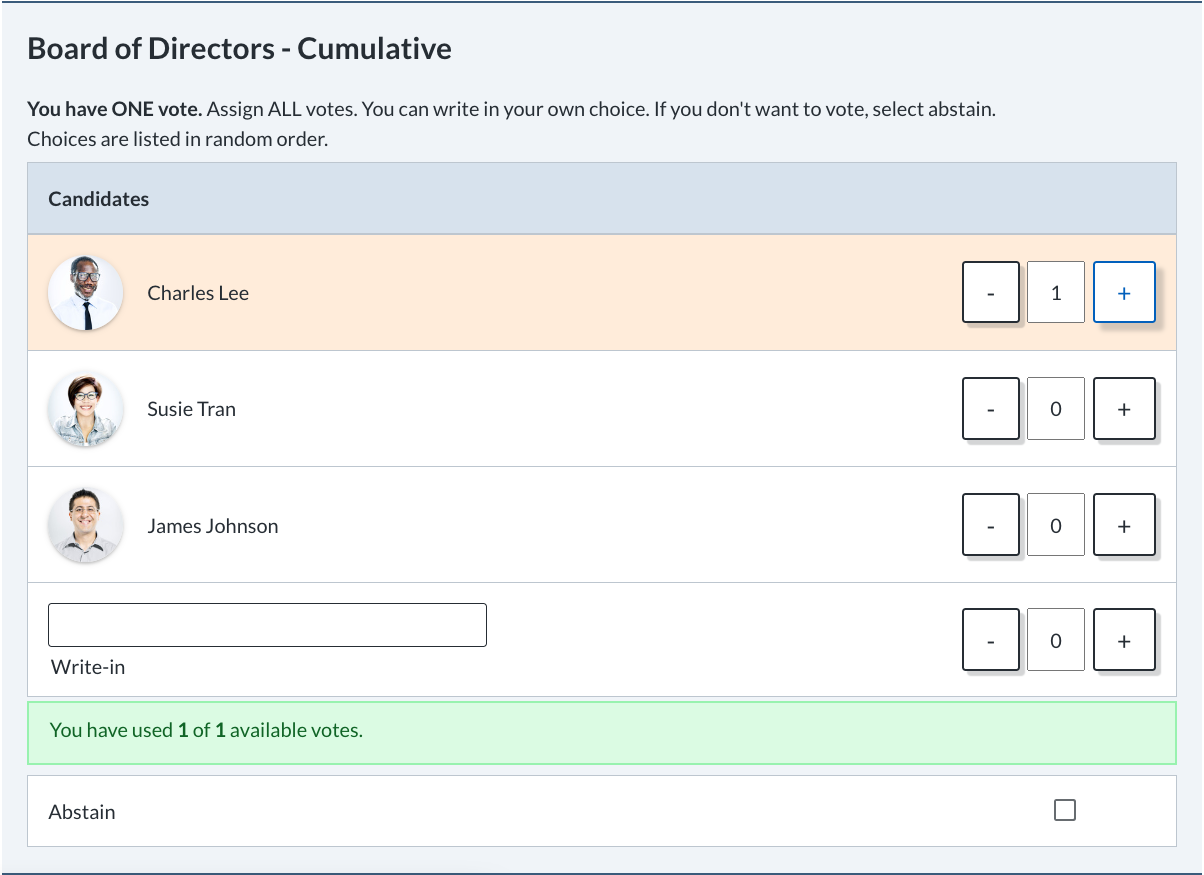 The cumulative voting method allows voters to provide a more accurate degree of preference for the board member and is similar to Preferential Voting from that perspective. Voters cast more than one vote for any candidate that they prefer and minimize or provide zero votes to those that they do not wish to be representing the organization at the board level. ElectionBuddy will still pick multiple winners even if a voter can choose to vote for only one candidate, by counting the individual votes per candidate, using a Plurality Voting tally.

We can combine Board elections with Board nominations. Learn more.