Board Elections: How Nomination and Election
of Board Members Works

Learn more about how ElectionBuddy easily handles board member nominations and elections for your organization.

What is a Board of Directors Nomination?

One of the things that makes a board election different from a standard executive officer election is that often, board of director elections involve multiple candidates running for multiple available seats on the leadership board. This is known as a “multi-winner” election (as opposed to a “single-winner” election). Most boards will want to hold this type of nomination, since it simplifies the election process. This makes board elections similar to any election where you have multiple winners, such as electing committee membership or team members.

Board members are usually given staggered terms in order to prevent all of the board positions from being available for election at once. This ensures that there are always experienced, knowledgeable directors on the board, along with new directors who can bring fresh ideas to the table. New and current board members work together to lead the organization.

An organization’s bylaws should contain specific information on how the board of directors are nominated and elected, the length of the term served for each board member, and how many voting members of the organization must vote in order for the board of directors nomination to be valid (i.e. quorum). Organizations can decide how frequently to hold nominations. Nominating committee members can happen every few months, every year, or whenever your organization decides to hold an election. 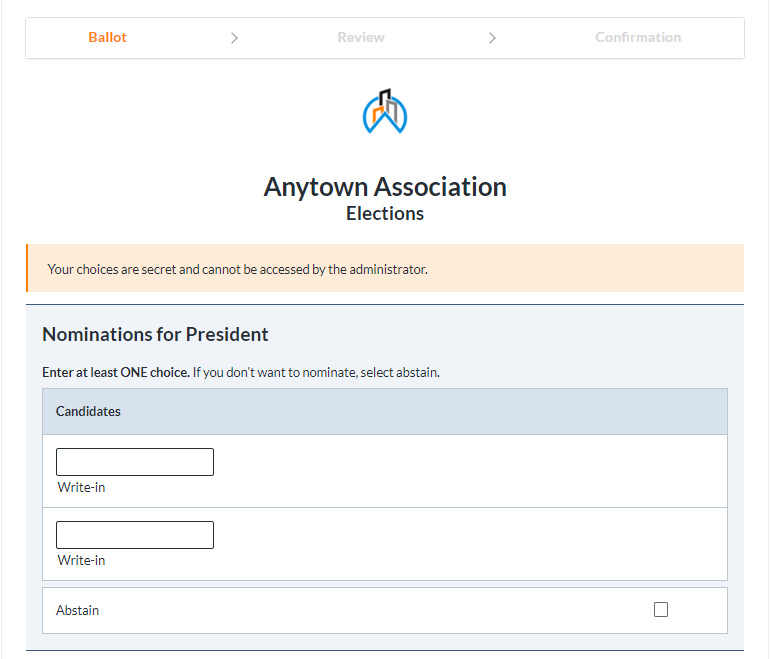 Possible Voting Methods for a Board of Directors Election

Because board nominations can be multi-winner elections, you need a voting method that allows you to have multiple winners. ElectionBuddy’s plurality voting method will allow you to put multiple candidates up for multiple vacancies on the board.

This also works for committee or school board nominations, and any election where you are voting for multiple candidates in a multi-vacancy position. 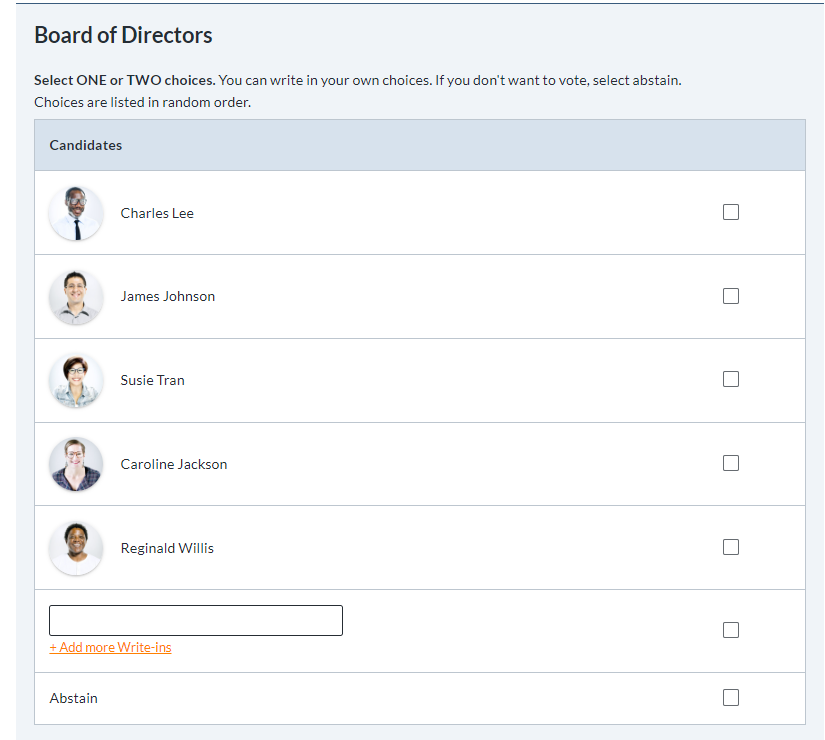 ElectionBuddy has other nomination methods that can be used in a multiple-candidate, multiple-vacancy position. These voting methods include:

We use STV to calculate the results for a multiple-vacancy preferential election. Preferential nominations are an excellent option for multiple-winner elections because voters can indicate their preference for a specific candidate relative to the other board members. In contrast, with plurality, voters are only stating their board member preferences relative to nominees they didn't vote for; there is no way to gauge preference among the candidates they chose. Preferential nominations give a more precise picture of how the voters truly feel about the nominees. 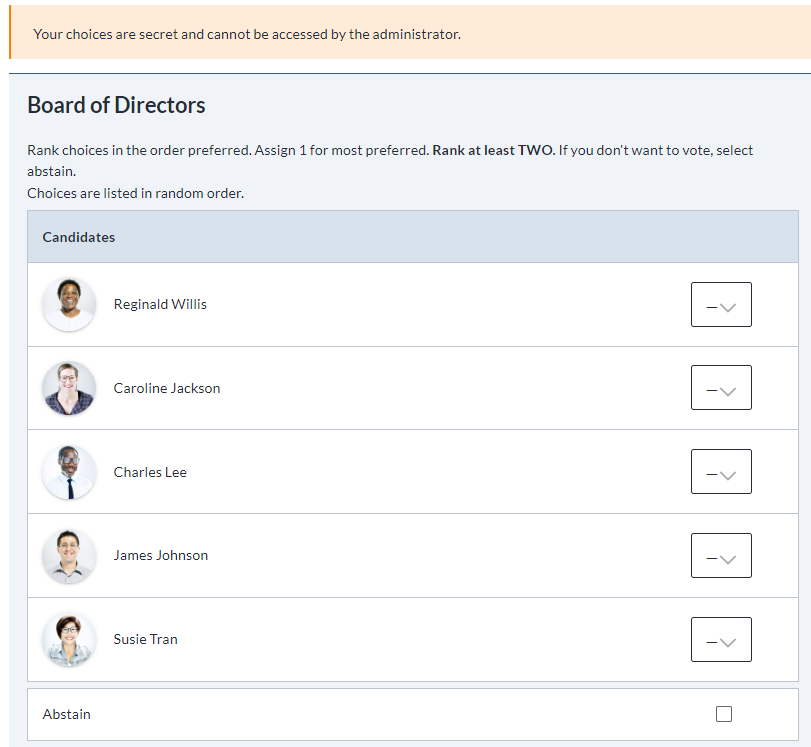 The cumulative voting method, like the preferential voting method, allows voters to express a more accurate degree of preference for the board member nominees. This is because voters can cast more than one vote for any candidate that they really prefer over the others. ElectionBuddy will still pick multiple winners even if a voter can choose to vote for only one candidate. 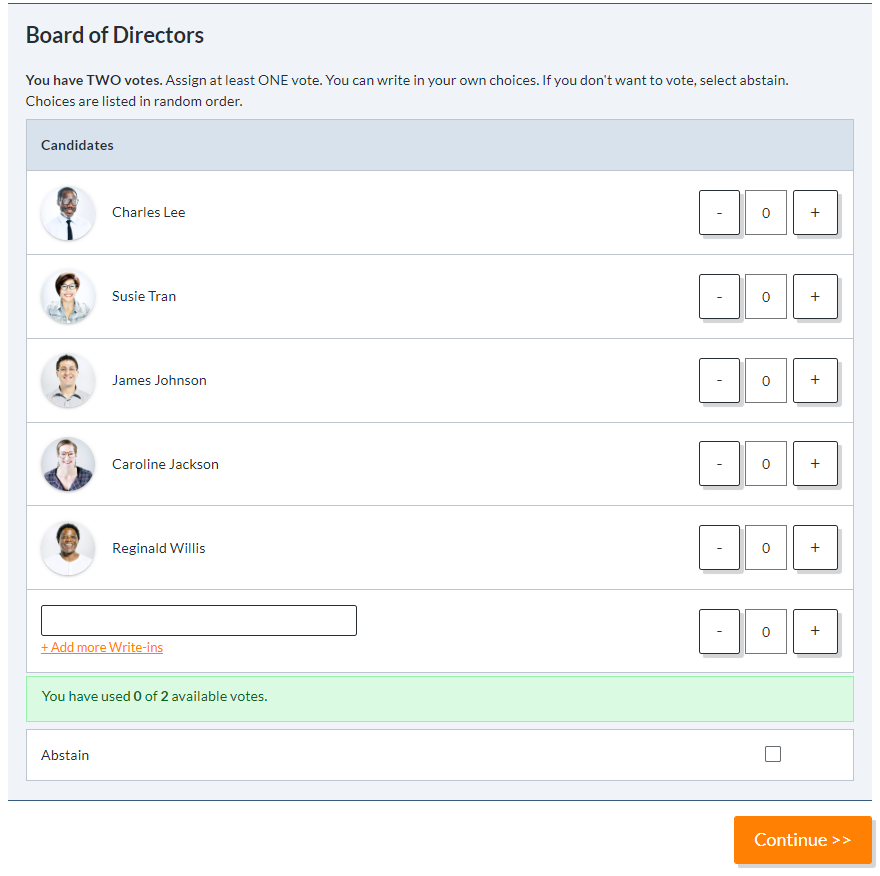 Common Ballot Features Used in Board of Directors Nominations

Common features used when building a ballot for Board of Directors nominations include:

Try a board of directors vote now!

Create and test a board of directors ballot in ElectionBuddy for free.
Start For Free