Learn more about how ElectionBuddy easily handles
all types of voting for your organization and how you can hold a referendum.

What is a Referendum?

A referendum is where voters are asked to make a “Yes” or “No” decision on a proposal. 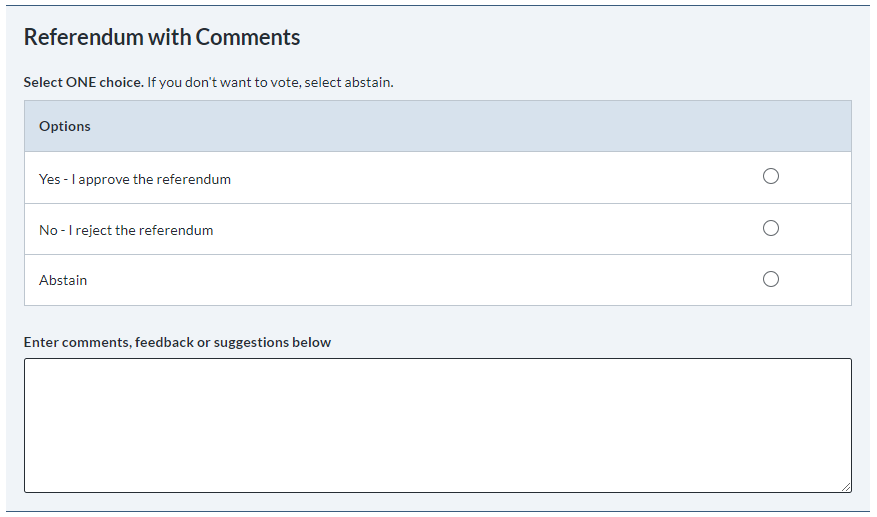 It is possible to have a “multiple choice” referendum (i.e., where the answers are not just either “Yes” or “No”), but multiple choice referendums are less common than the binary ballot. Contract ratifications, bylaw amendments, and budget approvals are specific types of referendums, but a referendum can be any proposed change to binding documents or laws. State and federal governments can use a referendum to allow voters to approve of or reject a new law, proposal, or course of action. The result of a referendum may be the adoption of a new policy or law or a change to an organization or government constitution. Not all referenda are binding. Some referenda are held to gather citizen opinions and can be referred to by decision makers. You can also check out our post about the differences between an initiative and a referendum if you’d like to understand them better.

A very closely related type of election to a referendum is known as a plebiscite. The plebiscite is essentially the same as a referendum; however, there is a major difference. A referendum is used to change constitutions or legislation (or any sort of other written rules). Taking action after the results of a plebiscite is optional. Plebiscites are like surveys that allow voters to voice their opinion about proposed changes. Because of this, plebiscites are sometimes referred to as “advisory referendums” — ultimately, the results of the plebiscite may not cause a change, but can imply that a change is desired by the electorate. When a plebiscite occurs, government legislature and other officials can veto proposed measures and no change will occur.

Depending on who you ask, you’re likely to get a slightly different definition for the term “referendum.” The definition of a referendum all depends on things like the country or organization that takes the initiative to start the referendum process. Each country, state, and organization has their own rules about holding a referendum. Most, if not all, types of these vote electoral systems fall into three main referendum categories.

Referendums differ depending on the party that initiates the process. With a citizen initiated referendum, a specific percentage of eligible voters or more should petition the government or electoral body for amendments to the legislature or specific articles within the law. These referendums are typically non-binding, which means the government doesn’t have to act on the outcome of the vote. But it gives voters a chance to voice their opinions on the proposed laws, legislature, and current measures being taken by the government.

In a government initiated referendum, on the other hand, government authorities take the initiative to start a new referendum. This type of referendum is typically used to approve proposed constitutional changes into law. Governments can also use this referendum to assess how the public feels about a particular issue on the ballot. States will hold referendums to get the opinion of each citizen on proposed laws either before or after the laws are passed by the state legislature.

An optional referendum results from a request from an organization’s executives or a country’s legislative branch. An authorities plebiscite is initiated by the government or the legislature and may include direct or indirect questions that probe the public for its sentiment on particular issues. For example, a popular referendum may be held to repeal existing laws and constitutional statutes. A recall referendum may also work to remove an elected government secretary or official before their term in office ends.

The results of a binding referendum have to be acted upon as stipulated by a state, country, or organization’s constitution. Mandatory referenda usually have binding outcomes and amendments that must be acted on. For consultative referenda, on the other hand, the government or other authorities can partially act on any resolutions from the election process. In other cases, the overall decision requires further deliberation and may require an additional referendum. Optional referenda are usually consultative, and the governing bodies may ignore the ballot results.

Possible Voting Methods for a Referendum

ElectionBuddy has a voting method called plurality that works very well for referendums. Simply set up the ballot as a question with one vacancy, which only allows voters to choose one of the listed options. On the ballot, list “Yes” and “No” as the two options. This electoral system design will allow the voters to vote in favor of or against the proposed initiatives and will give you clear results. When you use an online ballot, you can calculate the results of the referendum easily.

When you hold a referendum, there are special features you may want to add to the ballot. Common features used when building a ballot for a referendum election include:

Including these ballot measures will help ensure that proposed ideas are rejected or approved properly and that the referendum runs smoothly.

Try out a referendum vote now!

Create and test a referendum vote in ElectionBuddy for free.
Start For Free