How the Ballot Results are Calculated

A simple vote counting algorithm is used to count the votes cast on the ballots during approval voting and determine the results of the election. The winner is the candidate (or candidates, in the event of a tie) who receives the most votes (i.e., is most approved by the voters).

What Is Approval Voting?

Approval voting is an electoral method that lets voters choose (or “approve”) any number of candidates on the ballot. In elections, the most popular candidate with the largest number of votes wins. 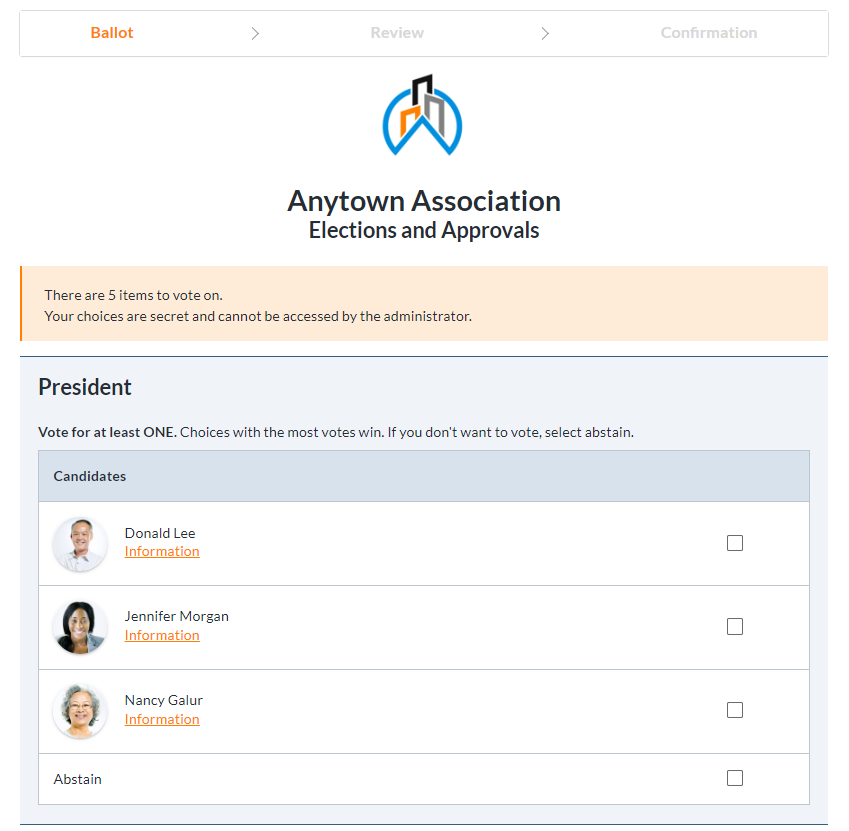 Pros and Cons of Approval Voting

Approval voting methods break free from the rigid criterion of single-choice voting while still benefiting from a similar simple voting system. The candidate election approval process gives voters more freedom to express their votes and their preferred choice of legislators, laws, or candidates. Preferences approval voting translates to a better gauge of candidate support. However, some critics (particularly those advocating for a ranked choice voting system) argue that approval voting may be reduced to a numbers game. And it may skew results towards non-majority candidates, electing officials that don’t necessarily represent the majority of voters.

Let’s take a deeper look into the pros and cons of approval voting.

Approval voting lets voters have more choice and be more expressive since they’re allowed to vote for all the candidates they support by marking them on the ballot. Approval voting satisfies voter preferences and removes vote splitting almost entirely, virtually eliminating any spoilers.

In a plurality system, ballots become spoiled (i.e., not counted) when voters mark more than one candidate on their ballot. When ballots aren't counted in elections, voters don't have a fair say on which candidate they support. If enough ballots are spoiled, it will impact the results of the election. With approval voting, voters can vote for more than one candidate on the ballot, leading to fewer spoiled ballots and voters having a fair say in the results of the election.

Approval ballots look the same as regular voting ballots, except the rules indicate that voters can vote for any number of their candidate preferences. These rules make it easy for voters to understand the election process and vote properly. The results of the elections are also very straightforward with approval voting. You get a list of the candidates with the number of votes they receive, and the winner is the candidate with the highest number of votes.

Since voters are free to vote for whichever candidates they want, approval voting tends to elect more consensus winners. These candidates would typically also beat all rival candidates head-to-head in a general election.

Approval voting gives a more accurate measure of support for alternate candidates who likely wouldn’t have seen the same number of votes if plurality voting was applied. Since voters can vote for as many candidates as they want, candidates typically get more votes than they would in a plurality voting election or single vote election.

May Elect a Non-majority Candidate

Approval voting doesn’t always elect candidates with broad support. There is no rule stating that the favorite candidate will win. For example, a candidate with zero supporters could still win if the majority of people voted for them as a backup, giving the candidate an edge over candidates that even more than half of the electorate voted for as their first choice.

Because voters are unable to distinguish between strong support and weak support for candidates on their ballot, voters may potentially elect a minority candidate that doesn’t embody majority representation.  If you want to allow voters to be able to indicate strong or weak support for a candidate, you can use a ranked-choice voting system for your general election.

Savvy voters who understand approval voting can form a strategy to ensure that their vote influences the outcome of the election. A voter's inability to distinguish between support in approval voting leads to an incentive to vote strategically (rather than being sincere in their choice), putting voters on uneven footing.

Approval voting is used in several privately administered nomination contests or internal elections, such as in political parties, learned societies, committee meetings, educational institutions, or corporations. You can use the election approval voting process to determine a new budget, pass a new bill, or elect a new party representative.

In the USA, each state has different methods for voting, and there are some locations that use approval voting. For example, Fargo, North Dakota and St. Louis, Missouri have implemented approval voting in local house and primary elections starting in 2020 and 2021, respectively.

Robert J. Weber coined the term "approval voting" in 1971. He proposed approval voting as an alternative to plurality voting, with the simple modification of allowing voters to have a choice of as many candidates as they wish. The concept of candidates approval voting was more fully published in 1978 by political scientist Steven Brams and mathematician Peter Fishburn, who built support for the idea.

An approval voting ballot is pretty much the same as a regular ballot. The ballot is segregated by positions to be voted on, with the names of the candidates listed alongside spaces that can be marked to indicate a vote. The only difference compared to traditional voting is that an approval ballot allows voters to choose more than one candidate. The ballot includes directions that indicate that the voter may select any number of candidates.

You can easily set up approval voting ballots on ElectionBuddy. Just adjust the settings so voters can vote for multiple candidates! The results are tallied using a simple vote-counting algorithm that delivers accurate results for elections in real-time.

Create and test an approval ballot in ElectionBuddy for free.
Start For Free